A Lifetime of Love and Devotion To our Pets. At Icewind we completely relate to animals. We strive to be the best and only the best will do for our dogs. They always come first and are given the best of everything. Having a strong connection with each and every dog and puppy we have is a great rewarding experience. Starting in the 1960’s we have acquired more extensive knowledge over the years than most dog trainers, breeders and enthusiasts.

Our dogs are allowed to run free and play with each other and us in a huge fenced-in area, enjoying the snow and sunshine. Providing lots of hugs and kisses are important, but thinking exercises are also needed. Stressed animals can experience fertility problems. The dam’s temperament can affect the puppies – good mothers produce good puppies. We are very concerned with each one of our dogs’ needs. Simply talking to our dogs is as soothing to them as it is to us. Being serious breeders, our goal is producing top quality puppies with the best temperaments. The AKC has told us we are a model Kennel. Other breeders have asked us to mentor them. Many of our beautiful dogs’ photos are found today in magazines, books and on the AKC website.

We are willing to share our knowledge with anyone who asks. We welcome visitors with confirmed appointments to our home to learn more about dogs, we can answer all your questions and show you our dogs and where they live. For first time dog owners, we will take extra time to teach you how to raise a puppy the right way. This is part of becoming a Canine Whisperer.

The name “ICEWIND” began in the Early 1970’s after we acquired our first Alaskan Malamute. It was very fitting for the breed since Alaskan Malamutes thrive in the Ice and Wind. After we began raising horses we became a Farm, naturally we called it Icewind Farm. To this day the name has stayed Icewind Farm. We now live on a beautiful Mountain in Northwest New Jersey but have decided to keep the name. Karen and her Alaskan Malamutes can be found in several books still in print today.

#3. The Third Book is one of my favorites. Its a children’s book written by Robert Blake called “AKIAK” A Tale From The Iditarod. The artist used oil paint to create the illustrations for the book from many, many photos taken of our Alaskan Malamutes by Robert and Karen. Our one Malamute named “Raven” became the star of the book. She is pictured on the cover and all pages in the book. To enjoy this book today it can be ordered from Amazon.com

Welcome To Our World

The 60’s – In The Beginning, Karen started her show career at age 15 with a two beautiful Irish Setters named “Flash” and “Fuego”. To this day I still have the many ribbons and trophies won from them. Our family raised 3 German Shepards for the Seeing Eye Center for the Blind in Morristown New Jersey. One was selected for their breeding program.

1970’s and 80’s – Our three boys, George, Danny and Matthew grew up with our Alaskan Malamutes.

They all shared hiking, swimming, camping, and sled rides being pulled by our Malamutes. Danny was very involved in the AKC Show World starting to compete in confirmation at 8 years old and Junior Showmanship at 10 years old with his famous 100lb. Alaskan Malamute “Conan”. AKC Champion Icewind’s Conan The Barbarian was bred by us and not only received his AKC Championship from the Bred-by Class, but also received a WPD which is a Working Pack Dog Title. Danny also received the title of Best Junior Handler for the Alaskan Malamute.

1990’s – During the 90’s they were very exciting times for us. We always strived for perfection and now it was starting to pay off. Our Alaskan Malamutes were becoming famous. 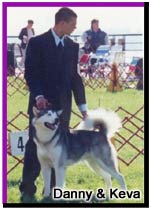 New York City. Karen was asked to talk about the breed while Danny, Matthew, and George gave a demonstration with our dogs.

1995 – The Regis and Kathy Lee Show – We were contact by Warren Epstein, a well know dog trainer on TV to bring in 5 of our Alaskan Malmutes to New York City. Icewind Alaskan Malamutes were to participate in a skit with Regis and Kathy Lee Live for a clue on the show for that day. The boys George, Danny and Matthew helped Karen handle the dogs for the day. 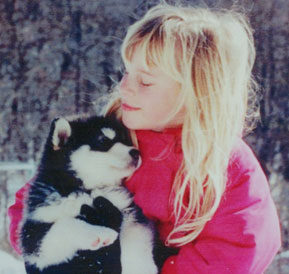 1996 – A little Russian girl named Anya came to live with us all the way from Siberia. She joined her older brothers George, Danny and Matthew. Karen and George were blessed with 4 year old Anya our beautiful and loving daughter.

1997 – Karen and Danny were asked to appear on the show Animal Planet in New York City with our Alaskan Malamute Dogs. Karen was interviewed about the characteristics of the Alaskan Malamute and Danny gave a backpack demonstration. 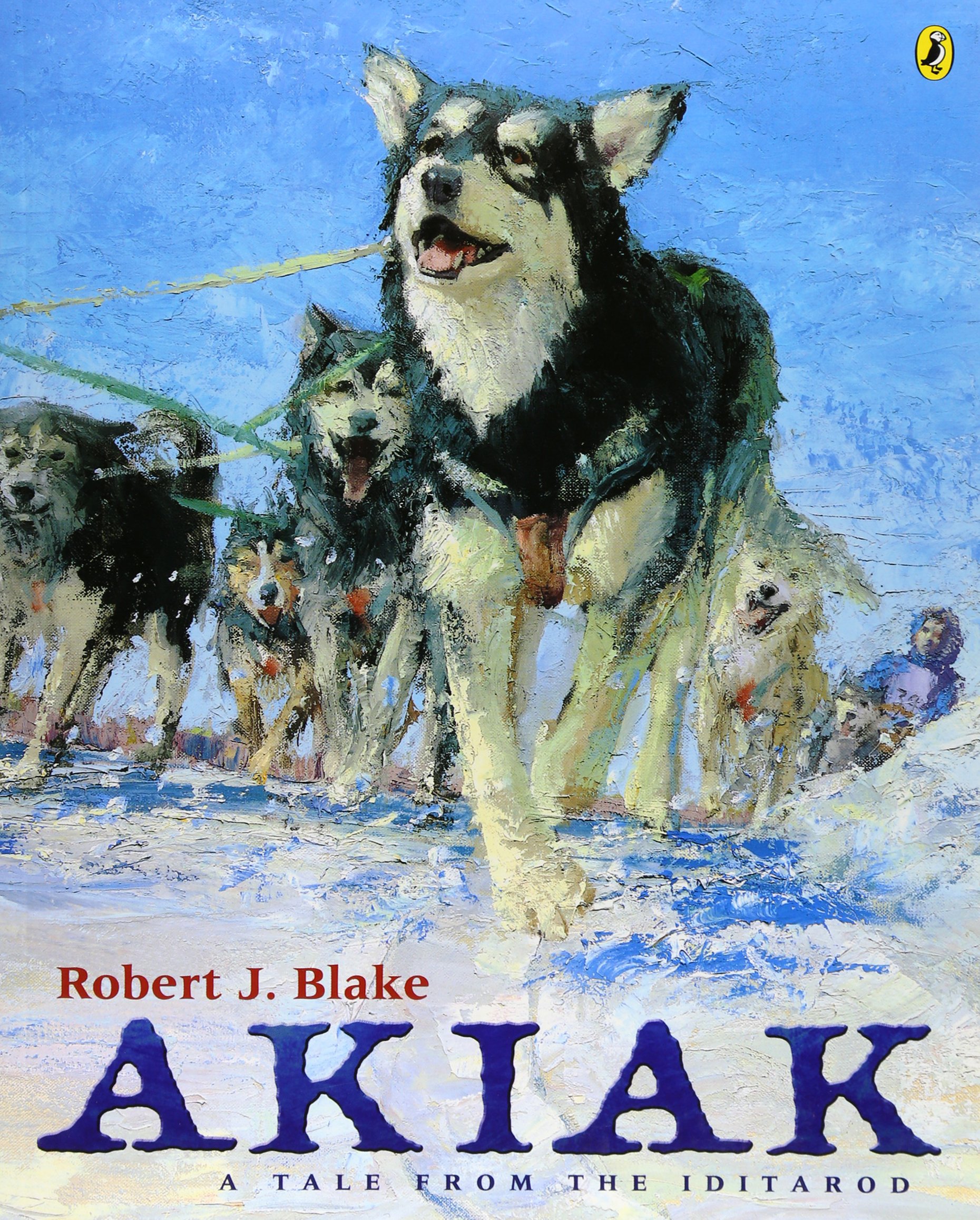 1997 – Akiak – written by Robert Blake  “A Tale of the Iditarod” Illustrations were drawn from many, many photos Karen and Robert took. Our Alaskan Malamute “Raven” was chosen to be the star of the children’s book.

1998 – Our Alaskan Malamute AKC Champion Conan The Barbarian was featured on the cover of the 1998 Alaskan Malamute Calendar along with many other photos of Icewind Malamutes on the inside months. Also, Was the arrival of our first Shiba Inu named “Yoshi”. A beautiful red female. Who was shown to her AKC Championship by Karen.

1999 – Icewind’s Goldrush The Terminator (Conan’s Sire) was featured on the cover of the 1999 Alaskan Malamute Calendar with other photos of our malamute puppies on the inside months. . 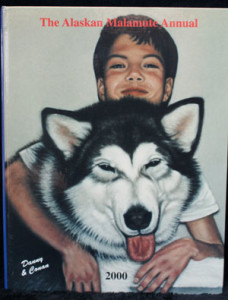 2000 – The Alaskan Malamute Annual ( A Collector’s Item ) featured a painting of Danny and Conan our home-bred AKC Champion Conan The Barbarian, WPD on the cover. Also AKC Champion Icewind’s Neon Glacier, WPD was featured inside the annual. For more information or to order the annual contact www.hoflin.com

2001 – The Beginning Of Icewind Farms Paso Fino and Rocky Mountain Horses. Beautiful dream horses with super smooth gaits. Anya and her mom enjoyed every Sunday riding like the wind all over the New Jersey Countryside. To this day Anya continues to ride in many exotic places around the globe. One of her favorites is on the Island of Aruba, where there are many fine Paso Fino horses to ride on the beach. Nothing is more thrilling then galloping on the oceans edge with a beautiful Paso Fino Horse.

2002 – Anya now turns her passion for horses to help deliver and train our foals, working mostly with her Dad. As, Karen continued to work for a well-known Standardbred Race Horse Farm where she specialized in the delivery of many foals that went on be famous Trotters at the Race Track

2003 – Icewind’s Myth N’ Magic (Conan’s Brother) is featured on the cover of the 2003 Alaskan Malamute Calendar. And was also used on the note cards for Pet Prints.

2004 – Once again one of our home bred Alaskan Malamutes Icewind’s Corinthian Gargoyle, WPD was featured on the January page of the 2004 Alaskan Malamute Calendar. Plus on the Shiba Inu Calendar for both 2003 and 2004 Yoshi’s Puppy “Sage” is featured.

2005 – Dog Fancy Magazine’s February Issue features Icewind Shibas on 2 full pages posing so beautiful on a rock wall. Our white Persian Cat named Mr. Freeze becomes a Movie Star, he was “acting” in the movie called Stephanie Daley appearing with actress Amber Tamblyn. Mr. Freeze’s part was to sit with Amber while she tried to pet him and then run off stage. Also for 2005 Karen and Anya were invited to appear on the TV show called “Kids Training Puppies” We both talked with Children about Shiba Inu Puppies and did some obedience training demonstrations. Then gave an explanation of the breed. The Children really liked it and enjoyed our Shiba Puppies. Anya is now 13 years old and decided to open Anya’s Puppy Supplies. Anya found most people needed help picking the right puppy supplies for their new puppy. Anya is very knowledgeable, patient and enjoys helping people. 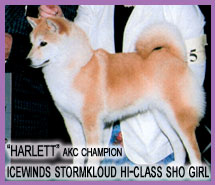 2006 – People Magazine contacts Icewind to use one of our well trained Shibas on a 2 page spread for an ad for The Eukanuba National Championship Dog Show. Since “Koki” was so well behaved, beautiful and photogenic they used his picture on both pages along with several other breeds. This was the December 4th, 2006 issue with Tom Cruise on the cover. Koki is a beautiful male red Shiba Inu, bred by Icewind and was also featured on Animal Planet’s Website in a slideshow, including Champion E-Cards and Winning Wallpaper, also more photos can be found on The Discovery Website. We are very proud of Koki who lives with Jimmy and Candy in New Jersey. We are honored that they chose Icewind for their shiba as Candy works as an attorney for AKC in New York City. Koki then had his photo shoot printed on a full page of the newspaper USA Today, December 1, 2006.

2007 – AKC Champion Icewinds Myth N’ Magic our home bred Alaskan Malamute and Conan’s Brother was featured on the Cover of Dog Fancy Magazine for January 2007 plus pet prints used his head study for their note cards. 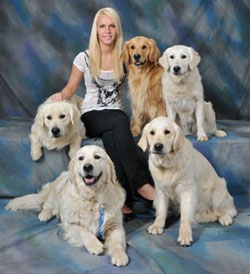 2008 – Anya has remodeled and expanded her Puppy Supply Store. Now you can find everything available you can imagine for your new puppy. Many unique and quality items are available here at Icewind for your convenience.

2009 – Anya travels to Russia, searching for Superior English Cream Champion Golden Retrievers. While attending the largest Dog Show in Moscow Anya meets many Russian Breeders. After a very careful selection and the help from our friend Sasha who Danny and Karen met during Anya’s Adoption years ago, they quickly became friends for life, as Sasha is also a dog breeder living in Moscow, she translated the Russian pedigrees. Anya traveled home on the plane with our first beautiful and amazing English Cream Golden Puppy named Falcor.

2012 – “Echo In Morocco” At Villa Oasis, home of Yves Saint Laurent and Pierre Berge lives Icewind’s Echo. Owned by Pierre she is pictured in the October issue of The Wall Street Journal Magazine on pages 107 and 111. 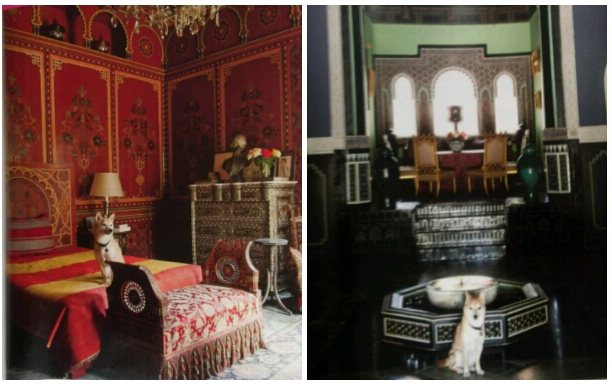 2013 – Present – Icewind continues to add several beautiful Goldens to breed with our Superior Russian Stud Dogs. We continue to add new International Champion Lines to our breeding program. After careful selection we chose several amazing Goldens from both Russia and Ukraine.

Our Grandson Mason has grown up with the puppies.  He helped us to deliver his first litter of puppies when he was just 2 years old!  He has a natural sense of the dogs and it has been thrilling for us to watch him grow and mature.  Who knows, another dog breeder in the making?

2018 marked 50 years of dog breeding for Icewind. We hope to have many more to come!