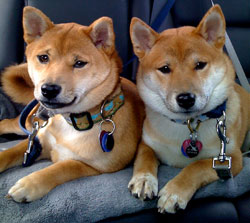 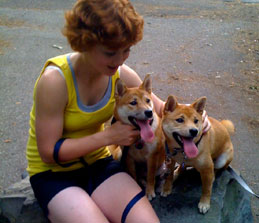 I wanted to give you an update on Joba (formerly Chipmunk) and Rosie (formerly Daisy) that Barry, Emma and I adopted from you in January.

If you remember, we only intended to come home with Rosie, but the minute we held Joba, we knew we had to take him, as well. I had never owned even one dog before, and when I told people (including the vet and trainer that we’d lined up beforehand) that we’d brought TWO dogs home, the reaction was always the same. “Two SHIBAS? You’ve never owned a dog and you brought home two Shibas? What were you thinking?” Needless to say, everyone thought we were nuts, but one look at their sweet faces and no one could blame us. After spending just a few hours with our new puppies at home, we couldn’t even imagine not having one or the other.

Both pups are doing great, and we love them more than we thought possible. They’re now seven months old and have completed both their basic and advanced obedience courses. Rosie, at less than seven months, passed the Canine Good Citizen test (Joba was just having a bit of an off night and was a tired boy, but will definitely receive his by the end of summer), which was amazing. Our trainer told us that they were the stars of the class and made a point of telling the entire class that being Shibas (known for being a bit stubborn) and also being very young, their level of training was absolutely amazing. We couldn’t have been more proud!

They both love going to the dog park to play with all of the other dogs and their owners. They are incredibly well-socialized and haven’t had a single problem with any other dog or a human, from very small children to adults. At the dog park, we’ve met two other Ice Wind Shibas, both adults, and they’re lovely, as well. Additionally, we’ve discovered that one of the girls who plays tennis with Emma also has two Shibas (Maya and Chase) that were adopted together from Ice Wind. It’s a small Shiba world!

We’re still feeding them Before Grain Salmon formula kibble and wet food, and they still receive their vitamins and Salmon Oil every day. The also love fresh salmon and venison, and because they’re spoiled (although I don’t like to think of it that way, because they’re so wonderful that they deserve the treats), we give them those on a fairly regular basis, as well. Joba now weighs almost 24 pounds, and Rosie is getting close to 21, but I think they’re both still going to grow more.

They’re both so smart, but they have very different personalities. Rosie wants nothing more than to be loved by every person she comes across. She’ll stand pressed agains someone’s legs forever, or at least until they stop rubbing her head. Joba is a complete boy, always ready to remind Rosie that he’s in charge, but mention biscuits and there’s no dog more eager to please than he. All I have to do is glance at the box of cookies and he hops into his crate as if to prove that he’s the most obedient boy on earth. Every time I look at them I can’t believe how much I love them and I can’t imagine not having them in our family. A huge thanks to both of you for raising them and taking good care of them until we could take over. They are both absolutely perfect.