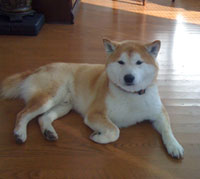 A beautiful Shiba Inu was dropped off at Icewind in the beginning of December 2009. We were told he was living in a college dorm in Florida and the kids use to get drunk and abuse, tease, corner him until he would bite, and then beat him. When we took him in, no one could get near him, he no longer trusted people. After weeks of re-training him with lots of patience, finally in January 2010 we started to make progress. Danielle put the most time into Rafaki, if it weren’t for her, he would be dead now. We talked with many shelters and rescue groups and they told us to kill him. We are so glad we didn’t cause he has found his forever home. James came to visit and clicked with Rakaki. Thank You SO Much James! From all of us at Icewind.